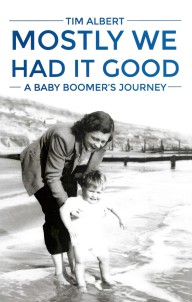 When Prime Minister Harold Macmillan famously stated, ‘You’ve never had it so good’, the 10-year-old Tim Albert was being miserable, stuck on a hill in an all-boys school. But despite an at times unhappy start, some dreadful mistakes and a rather unpleasant illness, he came to realise that he had been born in a lucky place and at a lucky time – and was lucky to be still alive.

In this idiosyncratic and insightful look at the second half of the twentieth century, the author combines family material with his own recollections and writings as a journalist. He drops, albeit briefly, such names as Teddy Kennedy, EM Forster, Libby Purves, Jimmy Savile and Saddam Hussein. He also witnesses such historic milestones as the post war recovery, the drive for fairer education – and the first attacks on the NHS.

‘I was totally hooked, spending the rest of the day reading it until I had finished. It is beautifully written and full of enthralling facts... a rare good autobiography’  - Dr Stephen Lock, former editor, BMJ

Read an excerpt from the book

A cub reporter on the moors

For talks on topics in this book click here

To hear Podcast with Tim talking about the book click here