50 years unravelling the mysteries of USA 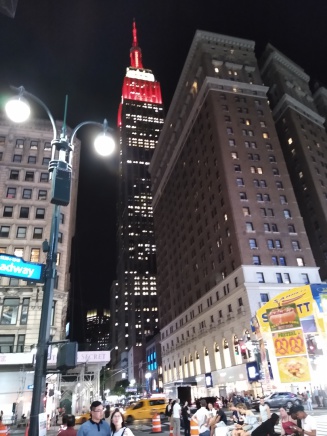 A steaming summer’s night in Manhattan. You have been travelling all day on your first ever-transatlantic flight. You have checked in at the McAlpin Hotel, once New York’s finest but now reduced to sleeping four students in a room. You venture out with your room-mates into the street: above you towers the Empire state building; swirling around you are yellow cabs, cops with guns and gusts of steam coming out of the pavement grills, After months of planning you have made it. This is America.

I had this life changing experience in 1969, thanks to an organisation called the British Universities North American Club. Now I discover that the distinguished journalist and broadcaster James Naughtie had a similar experience, one year later. We have both written about our half century relationships with America and Americans (and reader, I married one). It would be unseemly to comment on mine, but his is a delight.

Naughtie, like his distinguished BBC and Guardian predecessor Alistair Cooke, seems to possess a key that unlocks some of the convolutions (and convulsions) of American politics. Like Cooke he has endless curiosity, a contacts list to die for and the reporter’s knack (a skill, never just chance) of being in the right place at the right time Take this line about a casual introduction at a barbecue: ‘”Have you met my mother”, said Ted Kennedy…’

Naughtie’s relationship with America has history and depth. From humble beginnings as an assistant salad chef in the kosher kitchen of The Flagler Hotel in upstate New York, he studied for a master’s degree in journalism at the University of Syracuse and a few years later went on an exchange from the Guardian to the Washington Post. Since then he has been back many times as a front-line BBC journalist, which gave him access to almost anyone who mattered.

As an example of his reach, towards the end of the book, he talks one-to-one (as most people would not have the chance to do) with the defeated Hilary Clinton about her unwise use of a personal email account : ‘”It was a ‘dumb mistake,” she told me, and that was all.’

Political revelations go hand-in-hand with deft descriptions. Ronald Reagan had ‘a fixed calm that made him look as if he had been lifted from the porch in a Norman Rockwell painting’. John Bolton, the right wing politico who recently had a short-lived spell advising President Trump, has  been nurturing his distinctive moustache over the years ‘like the favourite corner of a maturing garden’. Not just a quip but also an insight.

And there are plenty more in the book. For instance Presidents Obama and Trump are ’both sides of the same coin’ – products of a reaction by large chunks of the population to being left behind. And this quote from Larry Eagleburger, the first George Bush’s Deputy Secretary of State: ‘We muddle through. We’re not efficient as a government. We never will be’.

One of my favourite passages is from the summer of 2018 when Naughtie is being entertained by a group of Republicans in Texas. Typically, the hospitality is generous and the attitudes fixed. His hosts attack Democrats for having no morals, but when Naughtie mentions Trump’s infamous ‘Grab ‘em by the pussy!’ tapes they say that we all have our weaknesses and you can’t blame a man if women put themselves in his way.

Naughtie continues: ‘It was agreed, unanimously, that Trump deserved forgiveness for groping sundry women. I wondered what would have happened if [Hilary] Clinton had asked for forgiveness for mismanaging an email account, but we moved on fairly quickly to safeguard a conversation that might otherwise boil over.’

This feeling that there is no point continuing a conversation seems much more prevalent than 50 years ago, and is emblematic of America's current deep and bitter divisions. What will happen after the Pandemic of a Century has swept through? No-one knows yet, but I look forward to Naughtie helping us to make sense of it all.

On the Road; American Adventures From Nixon to Trump, by James Naughtie, Simon and Shuster, 2020