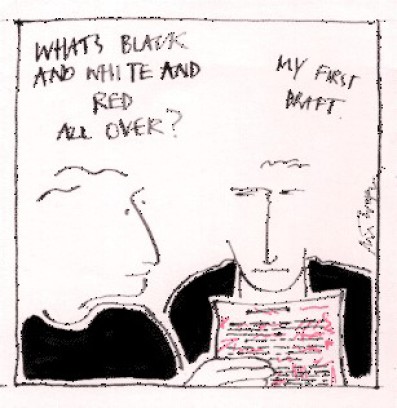 Not long ago I read a memoir written by someone with whom I had shared some of life’s pathways. It was fascinating to see his perspective, but my journey was spoilt by the large number of mistakes that kept intruding, particularly when it came to names.

So when I came to write my own memoir I was determined to avoid such stupidities. I checked and double checked while writing. Once I had finished the drafts I engaged the services of a proof reader, who went through the manuscript once, picking up several stupid (and not so stupid) errors. Then my wife, an experienced proof reader, went through it one more time, and I went through it two more times.

And yes, you may have guessed the next bit. As soon as it was published the eagle-eyed correctors contacted me. A cousin pointed out that on page 17 she was five years older than me, but by page 37 this gap had increased to seven. My financial adviser then emailed to tell me that on page 69, in a list of countries hit by protests in 1969, Spain appeared both in first and sixth place.

I started to read the book myself and found more errors. Some were minor, such as a missing accent in a French phrase and an unspotted space in a hyphenated word. But others made me wonder how I had not spotted them. I had moved the 1970 general election – and the year of my graduation - back to 1969. I had misspelt the name of my sociology lecturer (though in fairness Scottish names with Mc/Mac prefixes are always going to make trouble), and I had got the name of my grandfather’s business right only three times out of four.

It was all rather depressing, until I started to remember the advice I used to give while running courses on writing and publishing. Under the catchy title of Albert’s Law of Late Literals, I would warn authors that they will spot a mistake as soon as it is too late to do anything about it. The formal definition was first published in my book A-Z of Medical Writing.

So what happens? Is it carelessness? Is it a kind of word blindness that sets in after the first draft. Is it because the system is a complex one, often made worse by strict timetables and (paradoxically) the large number of people now involved in trying to spot mistakes and correct them? Is it because the electronic revolution has driven out the highly skilled professional readers?

Whatever the cause, I am coming to terms with the errors, mainly by the time-honoured techniques of reminding myself how much I did get right. And I am noting these errors down carefully, so that I can at least put out a corrected Kindle edition.

Though I expect that even then some will have escaped the net.