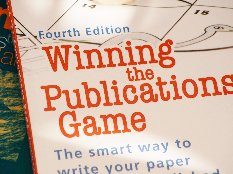 I would have been greatly surprised if, 25 years ago, someone had told me that I would be the author of a book on writing scientific papers.

I went on to study sociology and psychology, follow a career in journalism, and then set up a training business. My mission was to teach doctors and other health professionals writing and editing skills.

The courses built up a reasonable following. Then one day in 1993 I was asked by an entrepreneurial Dutch doctor if I could help young doctors write their papers – and get them published. I signed the deal and, helped by Bill Whimster, a genial professor of pathology and experienced medical writer, I designed a course that I hoped would suit the purpose – and started to run it.

Which was when my lack of knowledge about science writing turned into an advantage.

I started to notice that most of the people coming to the courses approached the task of writing in a very different way than I did. (And I was meant to be the trained writer.)

They usually set off writing their papers with no idea as to what the concluding message would be, nor where they planned to submit their paper. They spent hours collecting data and references, but did little thinking and planning. Their actual writing was painfully slow. When they finally produced a draft they were happy with, their colleagues – and their supervisors who should have known better – shattered their confidence by taking out their red pens and bombarding the author with details of what they should have done better.

In short, as an outsider I could see that the practice of writing and submitting a scientific paper had turned into a rather complicated game The real rules were not explicitly stated, and success was hugely weighted towards those who were already winners.

So I started to develop a second generation course. Instead of trying to teach the elements of a ‘good’ paper (which was difficult since no-one seemed to agree on its elements), the new course concentrated on teaching the process, step by step, from starting the paper to sending off the completed manuscript.

Soon afterwards I started work on the book of the course, and I chose as its title: Winning the publications game. I intended it to be a combination between a self-help book and an operating manual.

The first edition was published in 1997; the fourth in February 2016. I consider that in itself some evidence that the book has been a success. An added pleasure for me is wondering what my science teachers, were they still alive, would make of it all.