I set up Tim Albert Training in 1990. My intention was to provide training on writing and editing aimed particularly (though not exclusively) at doctors and other health professionals.

I developed and ran a range of courses, with the most popular ones being a generic course on effective writing, a specialist course on writing scientific papers, and a short course for editors of medical journals.

Over the next 14 years I ran about 1,000 courses myself, and engaged co-tutors to run several hundred more. I loved the work and was proud of what I was able to do.

In 2007, when I hit the age of 60, I honoured a long-term promise to myself that I would not go past my shelf-life date, and retired from th training room. But before I did so I trained tutors to run two of the courses, and passed on another to a colleague.

'I had to get up at 5 am and have a cold shower before driving to the station and catching the 6.35 to London. I also had to arrange a taxi to take the four kids (and German exchange) to school. When I return it will be 8.30 and I will have to join in the family workshop. The course was all worthwhile!'

Some of the things I was particularly proud of doing . . .

. . .and some of the courses we developed and ran 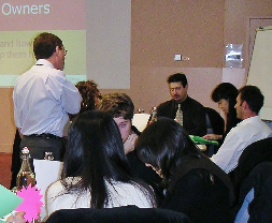 Other courses I developed included:

Medical journalism: the impetus came from doctors who wanted to write and publish in medical newspapers and magazines, and in the ‘lay press’. Participants were able to learn the processes of writing and submission, and had the chance to have an article critiqued. Many became published.

Effective newsletters: in the early 1990s, when the first desktop publishing packages became available, there was a pandemic of newsletters in the health services This course was a response, and it took those new to the task through the basic principles of editing, subediting, design and writing. This course was later used as the basis for a course on Publishing annual reports of public health.

News writing:  this course was designed for scientists who were used to writing scientific papers for medical journals but needed to learn the different technique of writing news stories for newspapers magazine and medical journals.

Train the trainers: this two day course was set up to share with would-be tutors all aspects of running the course on writing scientific papers – and getting them published. Those who attended the course were given a licence to use all the materials associated with it. A total of seven courses were run between 2006 and 2014, including two sponsored by the World Health Organisation for tutors in Africa and the Middle East. Many of these are still running the course (see list)

Personal development plans: this half day session was designed to help participants – mainly those working in communication industries – to develop a plan suited to their specific training needs.