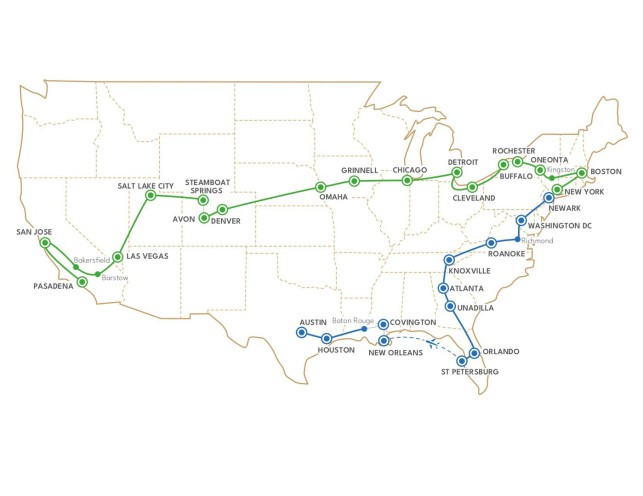 In the summer of 1969 I travelled 12,000 miles around America on Greyhound Buses and kept a 30,000 word diary. Fifty years later, aged 72, I revisited that trip (see routes above). This book is the result, and preorders are now being taken for the Kindle edition or the paperback version.

The following excerpt tells how the idea to make the second trip entered my head in an unlikely setting - and then refused to go away!

Ch. 1:The idea that didn't go away

I was with my dental hygienist, Marguerite, when the idea crept up on me. It was May 2018, and as I was settling myself down onto the chair she lobbed me a deceptively gentle question: ‘Are you planning any overseas trips for the near future?’

‘Maybe America next year,’ I replied. ‘For a golden wedding party.’

She made approving noises, tipped me back and started to give my teeth the full pressure-washer treatment. I countered the tedium by counting the years back to when the golden couple had wed. That took me to 1969 – a year that for me holds enormous significance.

It was the year I’d had my Trip of a Lifetime. As a 22-year-old social sciences student, I spent my summer in the United States. For two months I travelled – and slept – on Greyhound buses, clocking up 12,000 miles.

For the third month I stayed at a YMCA in California, working as an intern on the local paper. I came away with a set of cuttings that oiled my way onto one of the few journalism courses in Britain, which in turn set me up for a lifetime of writing, then teaching about writing. This experience changed my life …

As Marguerite continued her buffing I continued to reminisce. We baby boomers had been brought up watching American shows on our early black and white TVs. We’d followed the Lone Ranger as he and Tonto threaded their horses among giant cactuses and through massive mountains. We’d roared with delight at the social gaffes of the Hillbillies, a simple family from the Ozarks who found oil on their land and moved to Beverley Hills. We’d marvelled when lawyer Perry Mason finally found the crucial piece of evidence that would save his client from the electric chair.

Travelling to America, I’d imagined, would take me into a world of long cars and towering buildings, gorgeous vistas, beautiful girls with glossy hair and gleaming teeth, and fast-talking gun-toting cops. (I glossed over the possibility of robbers.)

I started to plan a trip for summer 1969. The planning took me over a year, during which time the Olympics were rocked by Black Power salutes, Apollo 8 circled the moon, and violence broke out at the Democratic Party convention in Chicago. President Nixon succeeded President Johnson.

When I finally got to the USA, I sailed off Long Island at sunset , gazed at the Grand Canyon and Niagara Falls at sunrise , rode a horse in Texas, marvelled at the wasteful opulence of the Houston Astrodome, swam in two oceans, and saw my first ever shopping centre in Washington DC. I tasted food the like of which I had never tasted before, and marvelled at the quantities. I returned with a love of America and Americans (and, reader, a decade later I married one).

Still in my dental chair I started to wonder how the memories were so fresh – and put it down to the fact that, for one of the few times in my life I’d kept a diary. And I have it still: 30,000 words in a flamboyant hand, over one and half spiral-bound exercise books. On top of that I still have six boxes of 35 mm colour slides ...

It was at that moment when a dangerous notion slammed into my brain: why not mark the golden jubilee by going back and doing it again? My unique collection of contemporary records would give me plenty of material for a book. As I travelled the country again, I could compare Nixon’s America with that of Trump’s. I could also compare how travel in general – and bus travel in particular – have changed. And look at the possibility that I too have changed.

It was a perfect storm of an idea, the kind that makes you say: ‘Shit! I can’t possibly not do that.’

I left Marguerite with a smile on my face. It was of course an unusually sparkling smile. 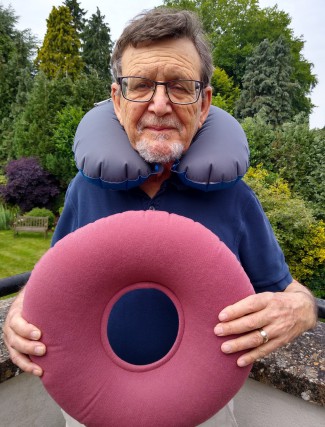 The smile quickly faded. Within days I was asking myself whether trying to repeat the trip of a lifetime was the plan of an ageing fool.

I was now 72, not 22. My 1969 diary has as its hero a young man bounding with energy, needing little sleep, showing little fear (even of heights), and snatching meals (unhealthy ones at that) whenever he could. Apart from a smattering of morning headaches (clearly caused by drinking and chatting the previous night), my only reported medical problem came directly from riding the buses and was what I described in my diary (fairly often, it must be said) as a ‘sore arse’.

Not surprisingly, half a century of life has left its mark. I have got used to comfortable beds, regular food, the companionship of marriage, doorto-door travel in comfortable cars and on occasions (particularly workrelated) flying in the more comfortable sections of a plane. My bones are definitely not as pliable as they were, my muscles less strong and my eyesight not as acute. Ten years after my trip I developed a nasty disease – ulcerative colitis – which is now less troublesome than in recent years, but still means that access to toilets looms larger in my life than it would for most people. About ten years ago I developed a severe allergy to wasp stings and started carrying Epipens.

As I have changed, so too has modern travel. Back In 1969 I bought a single pass for all my journeys, and I used coin-guzzling long-distance phone calls and a network of postes restantes to make all my in-country arrangements. I took photos with a Pentax camera and had to wait until I got back home before they were developed. I wrote my diary with a ball point pen and borrowed typewriters on which to write my letters home.

These skills were now hopelessly outdated. The tasks I would need to do – writing, storing, researching, reading, booking hotels, finding bus routes, hailing Ubers, taking photographs, tweeting, liaising with Airbnb hosts, writing home, checking on the weather, keeping up with the news on two continents – are now all done electronically. As someone who still used a mobile phone for conversation only, I had a lot of catching up to do,
in terms of both equipment and skills.

The final question was whether America would still be a good place to visit. During the first few weeks after my epiphany, Harvey Weinstein had been accused of rape, 70 former US attorneys had protested at the separation of migrant children at the border, and Starbucks had closed all its branches for a day for staff racial sensitivity training. Three mass shootings – in a school, an arts centre and a newspaper – had left 16 people dead.

Viewed from England, public discourse in America seemed increasingly bitter. My American friends and relatives didn’t help: ‘I must say, you are brave to visit while we are under the tyranny of Cheeto head,’ wrote one. ‘Crazy Times,’ wrote another. ‘All the players and the details make my head spin.’ And a third: ‘Still no joy in Mudville as the world races to recapture its pre-World War One nationalistic/populist/nativist/ fascistic fervour.’

Still the mantra kept going around my head: ‘I can’t possibly not do that’. I started some gentle planning. I bought some editation tapes, hired a personal trainer and enrolled on a Pilates class.

I hit upon an important linguistic distinction: I would not repeat the trip – I would revisit it. I would be away for 60 nights, in two distinct phases. I had to take the bus; that was a given. But unlike last time I would not sleep on board, but stay in proper beds. I even persuaded my wife Barbara to do some of the trip with me, though I found she was curiously reluctant to travel on the buses. 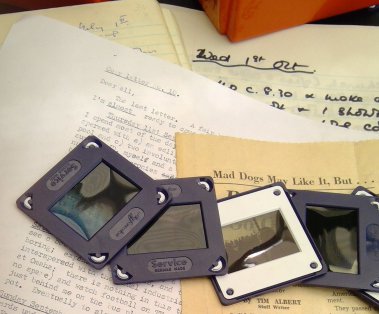 I started to pore over my 1969 diary. I tracked down a couple of people who figured in it, and I noted down my opinions, adventures and even some restaurants that, according to Google, might still be open. One day, going through my papers, I found an unexpected bonus – a full set of letters home that my mother had painstakingly photocopied.

I started to flesh out a route: like last time I would go from New York down to Florida and across to Texas and then, in the second leg, go from California across the country back to New York. I would hit most of the main cities I had visited then, but I would also make sure I went to smaller places less visited.

Then followed a wobble: some six months into the planning my health teetered. My back seized up three times (once when helping Barbara up after she tripped over a pothole), and then my right shoulder locked. I started to feel nauseous and lost my appetite, with my weight suddenly dropping about a stone, which sucked me into a merry-go-round of mainly unpleasant medical tests. The doctors found nothing wrong, though made
it clear that this was not the same as saying nothing was wrong.

The mantra – ‘I have to do this’ – kept recurring, and I persevered.

I practised madly with my new tablet (a Microsoft Go I called Geoffrey) and my new mobile phone (a Motorola I called Morris). I gave up on any thought of using my new Olympia digital voice recorder (Olive of course) and bought six pocket-size spiral notebooks from W H Smith instead. In what I thought was a masterpiece of anticipation, I purchased off the web two rubber blow-up companions – a neck cushion and a circular ring to sit on during longer bus trips – though I thought it best for these items to travel incognito.

One week before departure I paid an emergency visit to my dentist, not for another polish but for a troublesome tooth to be extracted. With two days to go I visited our local emergency centre after the bite of an unspecified insect started to swell alarmingly. As my good and implacably honest friend Jackie said to me: ‘Let’s face it. The really interesting thing about your trip is whether you’re going to make it.’

'A lovely evocation of heady times in America' - James Naughtie