An edited excerpt from part five (the 1990s), with additional illustrations. 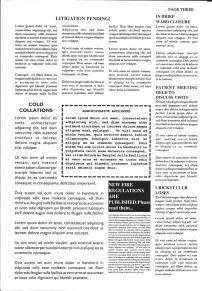 As it became clear that running courses on simple writing for health professionals was not going to be enough to support a full-time business, an unexpected niche appeared: newsletters. It was an idea whose time had come. Communications’ was a buzz word, particularly in Conservative party circles where an alleged lack of it was considered the main reason why so many people hated their policies. And newsletters had become a fashionable way of tackling the problem.

Until recently, any paper publication had been the province of expensive professionals such as printers, designers, photographers, writers and editors. Now all you needed to publish your own newsletter was an off-the-peg personal computer with a desk-top publishing package. It appeared to be a remarkably cheap solution, though this was misleading since few people bothered to factor in the time it would take.

Newsletters started to stream out from surgeries, hospitals and NHS offices. Most ended up in dog-eared piles scattered about their waiting rooms and reception areas, untaken and unread. Their failure was not surprising. Most were badly designed, ranging from sheets of paper covered with close-packed courier type (the one traditionally used on typewriters) to those cursed by polyfontophilia – the love of many typefaces (see illustration).

Most of the articles were dull, littered with capital letters. They would sing the praises of those in charge (‘The Senior Management Team is delighted to announce the appointment of a new Chief Accountant...’), or give instructions on how to behave (‘As the Human Relations Department has noted earlier, all those members of Staff who have been issued with a Photo ID should now wear it on duty...’). What few illustrations there were consisted mainly of primitive clip art or grainy shots of a Member of the Senior Management Team (initial upper case, please) presenting some trumped-up award to a bemused employee (all lower case). 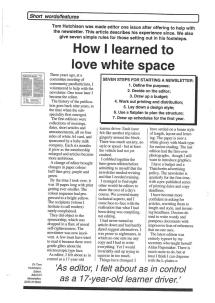 It was a classic case of technology outrunning the available skills . As one of the first to attend this course, a genial paediatrician called Tom Hutchison wrote in my own newsletter, Short Words (see left): 'I had never turned an article down and had hardly dared suggest alternatives. I was prone to nightmares, in which no-one sent me any copy and I had to write everything. Yet I would invariable end up trying to squeeze in too much.'

One of the first tasks of the course was to help participants work out what being an editor actually meant. I convinced them that it involved more than collecting articles and laying them out. They needed clear objectives and sensible planning, though the good news was that that once they had them in place their work could be more straightforward, and even more enjoyable.

Tom Hutchison concluded his article: ‘Things have changed. I have settled on a house style of length, layout and lettering... I have a budget...The newsletter is quarterly for the first time, with a pre-published series of printing  dates and copy deadlines... I have become more confident in asking for articles,     rewriting  them to length and style and inventing headlines... '

I started to publish newsletters for various organisations. My first client, when I started my business in 1990, was the College (later the Royal College) of Ophthalmologists, whose chief executive Margaret Hallendorff took a personal interest. She also showed what a keen hands-on editor could do.

But she had to be tough, facing up to those with  power and influence who wanted their photos to appear in each edition, or expected her to publish 600 words even though she had specifically asked for 200. She had her reward when the newsletter took second place in a national newsletter competition; the winner was published by Sainsbury’s and had a much, much larger budget. 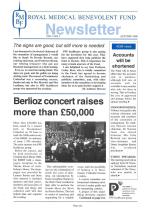 My friend RAF Thistlethwaite turned up again. I had first met him when he was press officer of the BMA and now, in retirement, he had found himself volunteered as public relations officer of the Royal Medical Benevolent Fund. He commissioned material for their quarterly newsletter while we handled subediting, layout and production.

We held our editorial planning meetings in the local pub. It was fun, enlivened by such moments as spotting in an article the proud statement that when one of their members became sick the organisation had ‘elevated the discomfort’. We changed it to ‘alleviate’, though with some reluctance.

Some of those we worked with remained blissfully unaware of how newsletters worked. One client expressed surprise that there was always just enough news to fill each page exactly. Others, finding that space had forced us to cut copy, demanded that we reinstate their golden words without being able to suggest what should go instead. I once suggested we could put a flap on the bottom of the page to accommodate the extra copy, and to my horror the client embraced the idea enthusiastically.