An edited excerpt from part two (the 1960s), with additional illustrations. 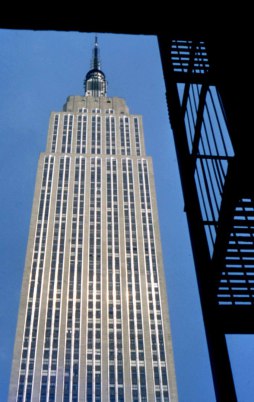 We were happy to go onto the streets to rail against the American imperialist capitalist running dog pigs – and we couldn’t wait to visit them. In the summer of 1969 I flew to New York under the auspices of BUNAC, the British Universities North American Club. They organised the charter flight, provided an excellent guide, and ran a two-day induction course at a New York Hotel.

My first night stuck in my memory for years. I came out of the hotel where we had been booked, strolled up a hot and clammy street, saw smoke billowing out of a subway grill... and then a fire engine rushed past - siren-blazing, ladders swaying in the traffic, firemen in their oversized helmets hanging on... I felt I had landed in a movie set.

It’s a good memory, except that when I went back to look in my diary I read that this memory was itself a kind of movie, and that the incident with the fire engine did not happen until a few weeks later, and in Canada.

I had come with a three-month pass for the Greyhound buses, and left New York for Boston. I stayed with a former neighbour whose husband was a housemaster at Phillips Academy, a smart prep school nearby. Among their charges (whom I may have met but probably didn’t) were the sons of future president George HW Bush.

Later I bussed down to Washington where I spent a few days in the office of a Congressman Bingham, a close friend of our family friends, the Goldwaters. I was scheduled to stay overnight with another of their friends, a staffer for Ted Kennedy. At the last minute she cancelled and I had to stay elsewhere. One of her colleagues wanted to go to a party in New England. The colleague’s name was Mary-Jo Kopechne, and the party was the one in Martha’s Vineyard when she was killed in Kennedy’s car after it had crashed off a bridge. 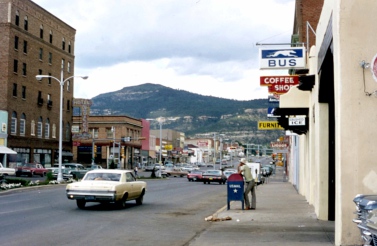 That was not the only slice of history being made around me. A few days later, as we passed through some mountains in Tennessee, the driver of the Greyhound bus snapped on his intercom.

‘At this time the first American is due to be landing on the moon’, he said.

Whoops of joy filled the bus. The event remained a source of pride throughout the rest of my trip. I noted in my diary the appearance of topical drinks such as Moontinis and Moonhattens, and when I returned to England I brought my brother a globe of the moon. 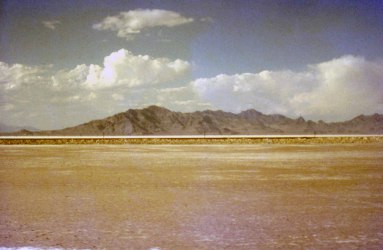 As I rode the buses I read the whole of War and Peace, slept a lot, and gawked through bus windowns at the passing deserts, mountains, lakes and cities. I still have five boxes of colour photos, though most of them are landscapes. There are no photographs of me in front of famous buildings, though there is one of me on that horse in Texas.

In the buses, usually at night, I met soldiers on leave from the Vietnam war, students travelling to demonstrate against it, a man going home with a new leg, and a 16-year-old girl who, I confided in my diary, told me that the world was in a mess and that there was little anyone could do to change it.

Americans, I found, were extraordinarily generous. People I had just met bought me meals, guided me through museums, and provided me with 24-hours-worth of sandwiches. They introduced me to BLTs and McDonald’s hamburgers, neither of which I had eaten before. I was taken to Chinese restaurants where I came across doggy bags and hot towels. I ate three Mexican meals and hated them all.

On several occasions I climbed into the cars of complete strangers for a tour of the city: the highlight was often the deprived and burnt-out scene of still-recent rioting.  In Chicago I chatted to a young waitress who, after her shift had ended, took me to a park and showed me where she had been the year before when Mayor Daley’s police had waded into protesters during the Democrat Convention.

After four weeks travelling, from east coast to west, I arrived in Pasadena, a hot, smoggy and well-heeled suburb of Los Angeles. My university course had required me to use this long vacation to experience something ‘vocational’, so I had persuaded my friend Martha, recently relocated from Wimbledon to Pasadena, to see if her father could fix me up with a job on the local newspaper, for which he was the insurance agent. He got me in, but only as far as the advertising department. 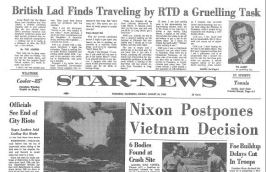 Within a few days I talked my way up into the newsroom (my diary doesn’t say how, though it was probably through persistent nagging). On my second day in the newsroom I came in complaining about my eyes and nose and chest, and someone suggested I should write a piece comparing Los Angeles smog with London fog. I did and they published it, under the headline: Blimey! Oh for Some English Fog.  (Pasadena Star News, August 21, 1969). A few days later they sent me to try out their public transport system by going by bus to see the Queen May laid up at Long Beach. 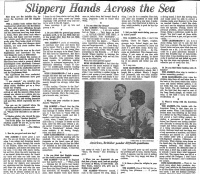 I was taken under the wing of the resident humorist, a middle-aged man with a beard, a generous nature, a talent for comic writing and a proper humorist’s name: Russ Leadabrand. He suggested that we should write a joint piece, in which we would independently write answers to a ‘questionnaire’ he devised (but attributed to professors from the totally fictional Miskatonic University). Questions ranged from ‘How do you greet each new day?’ to ‘Do you think that English women are the world’s most beautiful?’  I found it hard going, but the article was published on the front page of the Sunday feature section under the title: Slippery hands across the sea.

I  found myself being sent on all kinds of assignments – and writing about them. At an Old People’s Centre I was outplayed by octogenarians in shuffleboard and pinochle (British Lad Toppled Off ‘Centre’). I attended a Canada vs USA cricket match (Our Lad Explains Cricket – We Think). I struck up a friendship with members of the local police force who allowed me to ride in the back of their police cars. We sped, siren blazing, to investigate one call where a gunman had allegedly been seen; we found no trace of one.

I received fan mail. One published letter referred to ‘those adorable articles...by the boy from England. Such a darling point of view’. One lunch time a waitress, hearing my accent, asked me if I was that English student who was writing all those articles. 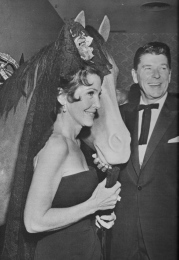 On my last night in Pasadena, with a hired tuxedo and haircut both paid for by the paper, I escorted Beverley, the junior reporter in the Society section, to a grand ball celebrating 200 years of the state of California. The host was the state governor, some second-bit actor I hadn’t heard of called Ronald Reagan. In my piece (Our Tim Goes to the Ball) I described turning up among the Bentleys and Cadillacs in our red Toyota to be greeted by a fake beefeater and a (probably) fake priest who directed us to the ballroom.

‘...Down in the lobby was Old California. Cellophane-wrapped oranges ripened on plastic trees. A picturesque well with real water glistened in the artificial light. A genuine stagecoach stood deserted, as if it had been ambushed with flowers on its way to the kitchens.'

On my way back to the East coast I wrote several more articles about my travels for which the newspaper had paid in advance. When I got home I was sent a cutting in which Russ Leadabrand bade me farewell: ‘One of the pleasures of this summer has been the visiting in the office with Tim Albert, an English chap, who somehow got on our staff for a few weeks...Next year there will be more Englishmen over here. They’ll come because Tim Albert was here and took home with him fond pictures of the Hyperion Sewage Outfall, Wilmington’s Backwater and the gravel pits at Irvindale... I wish him Godspeed on his plan to picket the Tower of London when he gets home.’