The castle: early memories of being stuck in my cot, and of not losing the lavatory key

An edited excerpt from part one (the 1950s), with additional photographs.

My predicament caused some consternation in the Albert household, since my father’s practical skills were as basic as the half-dozen tools in the cellar. He sent out to Messrs Gibberd and Sons, builders and decorators, less than a hundred yards away on Wimbledon High Street, and they despatched a carpenter who managed to saw me out. I stopped wailing; the cot was repaired. 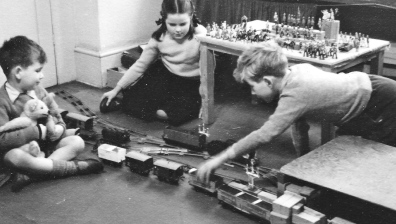 The incident, one of the two unhappy childhood memories I still recall, took place in the early centre of my operations – the ‘nursery’. It had brown linoleum on the floor and a broad ledge crossing the whole length of the rooms underneath the windows. I would sit on the ledge and stare at the formal garden and grand house behind, or crouch underneath in games of make-believe.

This is where I stored my toys, which I loved and abused. Teddy lost hair when I tested my hairdressing skills; the bendy green-jacketed golliwog lost bits of rubber at the extremities, exposing his wire skeleton; Muffin the Mule lost a leg; and the Pelham puppet – a strange androgynous figure with orange hair, green trousers and red checked shirt – was never knowingly untangled.

The outside world intruded via a brown Bakelite radio, mounted high on a shelf. My favourite programme was Listen with Mother, a 15-minute programme of songs, stories and nursery rhymes at a quarter to two every weekday. This was the source of my first recorded quip.

‘Are you sitting comfortably,’ we were asked.

I don’t remember this, but the story was often repeated.

In the next room was what my father called, in his briefing letter to the decorators, the ‘night nursery’. The Victorian nomenclature was soon droppedand it became ‘the boys’ bedroom’. Across a little hall were another two bedrooms, one for my parents and one for guests. Between the two sets of bedrooms was a bathroom and a separate lavatory. It was definitely not a toilet, which I soon learnt was a word used by those who lived down the hill.

This room played a pivotal part in my second unpleasant early memory. The key to the lavatory door went missing, and a story emerged that it had been flushed down the pan. I was questioned by the great interrogator (though not tortured), and in a fit of hyper-honesty said I couldn’t be sure whether I had taken the key, or not. This was taken as a plea of guilty, and I was slapped, on the leg, once. The key was later found. I am still unsure what lessons I derived from the experience.

The ground floor, well-ordered and spotlessly clean, was for grown-ups. At first it was sparsely furnished, with light-brown armchairs grouped around a long, low stool and a superior wooden-cased radio. The dining room was dominated by a sideboard with deep whorls of old oak, on which stood two bowls of fruit and a silver-plated bell-shaped cocktail mixer from Asprey, given by Great Aunt Alice to my parents as a wedding present. It was a curious choice for the middle of a war, but I suspect she felt my father already had the basic requirements of a gentleman and needed a touch of louche luxury.

In those early days, I had little cause to stray out of ‘our’ part of the house and into what the estate agent’s particulars called the ‘excellent domestic offices’ at the back. Here my mother operated with the help of the au pair and later a daily help. Outside the kitchen door (or ‘tradesmen’s entrance’ as the estate agent had written) were a lavatory and a garden shed. The front garden was equally small, and dominated by a copper beech tree that 60 years on is still there although, like most of my generation, now firmly clipped and thick of girth.

As time moved on I ventured out from this castle, first riding in the controversial perambulator, later using my own chubby legs – though my freedom was restrained by a pair of reins. My mother and I walked round the shops in the morning and onto the common in the afternoon. Our normal route took us around the pond, though on fine afternoons we would continue across to Cannizaro Park, an 18th century mansion that housed a councilowned old people’s home (now inevitably a luxury hotel). We would stroll past the fountain and the parrot cage, through the trees, round the pond and up to
the sunken garden where we would sit on a bench and eat our Sunny Spread
sandwiches. Life couldn’t have been better.

In the autumn of 1952 the walks became longer, and went in the opposite direction. They took me to the nursery school run by Mrs James from her Victorian villa at the bottom of the hill. I coped, since it was for the morning only and I could wear my own clothes. I played the triangle in the school band. I also got married to Pamela, plighting our troth before our classmates with a Plasticine ring, but we soon drifted apart. 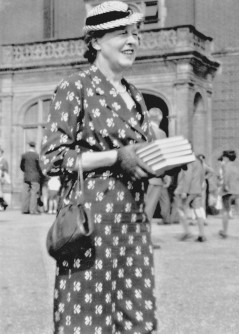 It would never have worked, though. She would have had serious competition for my affection from my mother. Around her I felt secure, supported and loved; it was a precious gift for which I surely failed to show enough gratitude. Sometimes she would allow herself the luxury of an hour in the afternoon sitting in her armchair with a copy of Woman’s Own, but most of the day she spent on the move in our service. Would she have liked to have had a job? I am not sure it is a meaningful question. It was not what she was there to do: she had her duty to look after her husband and her children, and in that order.

I was too young to realise how unconfident she was. After my father had died I came across some letters she had written to him around this time, saying how she fears letting him down. In one, written on a rare occasion when he was working away from home, she says: ‘This note is really to tell you I am very sorry for my behaviour these days – and I know it is awful, but I don’t seem to be able to help it...perhaps with the spring (?) weather I shall feel less weary, moody and depressed. Whatever you think, don’t think I don’t love you any more – I do, tremendously...’

What was that about? No-one now will know. But I am pretty sure my mother was sensitive about the difference in class between her and her husband. (Though I am equally sure Great Aunt Alice was delighted that she had married a man who might have shopped at Asprey.)

About that time a tragedy intruded into our home, though I was not aware of it at the time. I don’t know the exact date, but one night in the early 1950s I was awakened by the sound of strangers tramping up and down the stairs. The next day I learnt that they were ambulance men, and that they had taken my mother to hospital. A few days later David and I were taken to see her, propped up wanly in her hospital bed.

It was to be several years before I was told that my mother had given birth to a still-born boy. Grief in those days was private, and not shared with the children.