An edited excerpt from part two (the 1960s), with additional photographs. 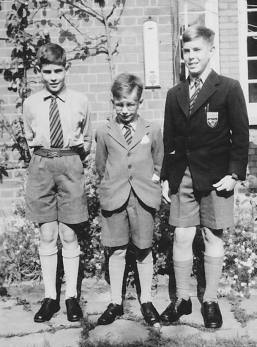 On a Tuesday early in September 1960 I left behind the long socks and long shorts I had worn at my prep school (see right), and donned a two-piece grey flannel suit. I had been given the option of grey herring-bone but I considered that would have been an adventure too far.

As with the previous four years, I had a journey to make. This time, however, it was not the familiar Waterloo Station, with its electric trains snaking to and from the south western suburbs. It was Paddington, hissing with steam and stuffed with Victoriana. As my brother David and I dragged our overnight suitcases up the platform, shepherded gently by our mother, I recognised some of my companions.

Some had made this journey before; others like me were making it for the first time. It was an older group than I was used to. Their voices were deeper. Many had started to shave, which was not something I was expecting to do for several years. With one exception they were bigger than me. This boy was the same size as me and he had been at the school at least a year; I felt upstaged.

The train we boarded did not speed back through my beloved Wimbledon. Instead it set a firm line towards the west, past the semis of Ealing and the terraces of Reading, deep into the Berkshire countryside, showing the first tints of autumn. After an hour or so we came to our destination: a long and empty platform, more of a halt than a station, in the middle of very little. The clue lay in the sign: MIDGHAM: FOR DOUAI SCHOOL.

As with the journeys to my previous school, a coach was waiting, and we were driven up a steep and bending road, past a pub, a newsagent, a manor house, a church and its graveyard, a thatched cottage. As we reached the top of the hill, a squat, square, crenellated red-brick tower loomed in front of us, like a liner coming out of the fog. I had arrived at Douai School, which would be the centre of my life for the next five years. 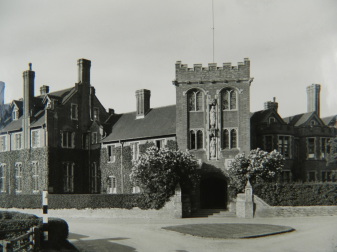 The tower was the official front door, but our entrance was round the back, through some wrought iron gates and past the lavatory block. We called this important part of our life ‘the jakes’, a throwback to the slang of the Reformation. It was a cold and draughty place of dripping taps and leaking cisterns, with badly drafted pictures of scrotums appearing, usually briefly, on the cubicle walls. I clearly underestimated it; some three decades later it became a listed building and was converted into up-market and expensive flats.

If this was the school’s digestive tract, its spinal column started a few yards away: an enclosed cloister of some 80 yards which served as activity hub and information highway.

On the other side of the cloister, facing the notice boards, were leaded windows through which could be seen a delightful, flower-laden quadrangle. It was strictly out of bounds, and I rarely saw anyone in it. I still don’t know what its function was: perhaps it was there as an allegory of the Garden of Eden. 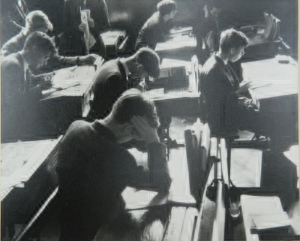 On a corridor off the cloister was the study hall (see left) – or in our slang the ‘stew’, spelt in that way on the justification that it was there we ‘stewed’. This was a bare-beamed hall containing a hundred or so desks, ingrained with the carvings of previous generations, on which we boys were arranged in strict order of seniority. There was a gap between the front and back desks, into which that first evening, and all evenings afterwards, the senior boys who had the luxury of their own cubicles trooped in for evening prayers.

At the other end of the cloister was another bare-beamed hall: the refectory. This was filled with long tables and long benches, while pictures of stern and long-departed abbots looked down on us from the high walls, hung between the odd painting (or reproduction – it was too far up to tell) of Flanders in winter.

As new boys our allocated tables were nearest the door and furthest from the kitchen. The food was brought to our tables by Irish skivvies, as indeed we called them. Then those boys seated at the top of each table dished out the food to those at the bottom. In an early lesson in social responsibility, at the end of each week the boys at the top moved down to the bottom while all the others moved up a place. With a slightly different social message, the fourth formers had to serve the prefects’ table – rushing up mid-meal whenever one of them raised a hand so that we could fetch a jug of water. Thankfully that was the closest we came to the public school tradition of fagging. 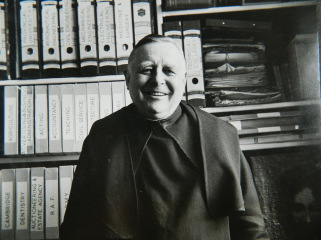 Headmaster since 1952 was Father Alphonsus Tierney, or Alfie as the school called him but not to his face (see right). He had cut his headmasterly teeth at the prep school, where he presided over what some later described as a country house atmosphere. Like Father Edward, his successor at the prep school, he was another rumpled cleric with a mournful aura, which reached its zenith one day when he realised that the touring theatrical company he had engaged to give a Shakespearean performance were a group of cross-dressing women of indeterminate age.

Alfie lived alone in the entrance tower and kept his finger on the school pulse with thrice daily trips up the cloister to the refectory. He had a caring nature and an easy authority and, as I found out several times during my career, a knack of telling you off in such a way that you ended up feeling his pain above yours.

On my first night in my new school I settled down in my metal bed in one of the junior dormitories. I found the bed surprisingly comfortable, particularly on the first night of term when the sheets were clean and crisp. We each had a small locker (though I am not sure we could actually lock it) for private possessions, but no personal privacy. We were allowed to bring our own extra blanket, which added a bit of colour; mine was brown.

'I met Tim (Albert minor) at a school reunion and he told me he had a new biography  and I was in it! I felt obliged to buy and was glad that I did. It is written beautifully in Alan Bennett style and for those in their sixth or seventh decade it is a jolly canter through life's bewilderment of 'What Happened'? and 'Why?'. It is also a most suitable read for children in their third decade, and will cast some enlightenment on the random forces that shaped the lives of their parents.' - Donald Cameron.