'Writing is in black and white. It will commit you to your statements . . . ' 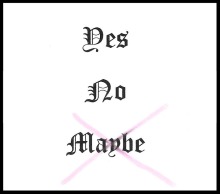 Thousands of people write and thousands more try to do so. The rewards seem to be high. Admirers will cherish you for your wit and wisdom. Lucrative commissions will flow in and your bank manager will be amazed at the transformation of your finances. Your local paper will be full of photographs of you receiving prestigious awards for services to medical publishing - and conference organisers throughout the world, and particularly in the Caribbean, will send you first class return tickets for yourself and your partner. You might even make it onto Question Time or Any Questions.

Inevitably there is a down-side. Writing is in black and white. It will commit you, and those that you are writing about, to your statements in a way that speaking does not. Your opinions will often be seen to be critical, even if you didn’t intend them to be or, worse still, had taken great pains to disguise them. If you report the views of others, they will almost certainly accuse you of oversimplification. And, if you become a published author, others will feel uncomfortable because they did not do it first. The professional classes are not immune to jealousy.

It may not end in tears, but it could spoil a good meal. I remember one formal dinner at which the guest speaker, a distinguished medical writer, was ‘buttonholed’ by an eminent researcher, and publicly attacked for allegedly ruining the reputation of a colleague several years before. At least he was told of his offence, even though he couldn’t remember it. Grievances tend to dwell in the minds of the aggrieved, and the medical establishment generally has far more subtle ways of dealing with ‘offenders’. Because of this, one successful medical writer decided early in his career that he would not write for publication until he had become a consultant. The tone of his writing since has confirmed his sound judgement.

This does not mean that you should not write. But it does mean that, if you do, you should realise that you are putting your head above the trench, and will attract snipers. You should be aware of this risk, and decide in advance whether – or when – you wish to take it.

One of the obvious rewards is the sheer pleasure of seeing your name in print The power of this should not be under-estimated. I know of distinguished doctors who regularly cut out their articles and send them to their mothers. However, as argued above, high profiles have their dangers, and if this is you only motive I suggest that you consider some other competitive activity like hang-gliding or medical research, that will give you the fame you crave without the same danger to your career or personality.

Another reason for writing is to further your material interests, a motive to which, in post-Thatcherite Britain, we can readily admit. You may do this directly, by marketing articles which will earn vast sums of money - or indirectly, by using publication to bolstering your reputation, career, practice or department. This is a straightforward reason and success is easy to measure.

Professional people often say that they want to write because they have something to say. In itself this desire is harmless enough – the urge to influence others has as long a history as the urge to profit at their expense – and sublimating it into print is an innocuous way of meeting it. If you decided that this is your main motive for writing, you should ask three questions.

The last question is particularly important: there is a huge gap between having something to say and being in a position to say it.

One of the pleasures of being a professional writer is that you are paid to find out things you would want to find out anyway. This should be coupled with a desire to tell others what you have found; this is the love of gossip in its more exalted sense of swapping information rather than assassinating personalities. Added pleasure may come from skilfully rocking boats with capslzing them, but be prepared for the shouts from passenger and crew.

Many writers say they particularly enjoy the tussle between that blank piece of paper and themselves. Writing is an intensely personal activity, and one of the few areas in which people can exert full power over what they are doing (this power may rapidly evaporate once it raches the editing stage, but that’s for another chapter). One experienced doctor- writer summed it up when he told me that his main regret in his writing career had been that he had cashed his first cheque. He wished he had kept it framed, so that it could remind him forever of the intense satisfaction that publication had given him

Some writers claim that they enjoy the process of writing, of sitting down and letting the words flow; others say that there is an inner demon which drives them to write. You can satisfy either need simply by sitting down and writing. There is nothing wrong with that, provided that you realise that your first priority is satisfying yourself rather than an audience, and that your chances of getting published rest on the unlikely event that the two coincide.

Motives are therefore important, because they will help shape the direction you choose. Anyone starting to write should understand their own; at worst this will avoid disappointment and at best will ensure a reasonable chance of becoming satisfied